Welcome to the Templar class build section for ESO. Here you can find all the Templar builds for the Elder Scrolls Online. The Templar can be played as a damage dealer, a healer or a tank. They perform well in a group or a solo setting, depending on how you set up your build.

The Templar builds that you can find here focus on optimizing your setup as much as possible, that way you can really perform as good as possible on your Templar. Sometimes gear can be hard to acquire depending on the build you want to use, that is why I made sure to always include three different setups, the best in slot, advanced and a beginner setup.

Nonetheless, I would always recommend getting the best setup like described in the build, to completely optimize your setup. Please keep in mind that combat changes occur all 3 months in the Elder Scrolls Online, therefore it is possible that certain sets will change for your Templar!

The PvE Solo Templar builds are optimized for solo gameplay. The builds below have a good balance between damage, survivability, healing and movement. Everything you need to get through ESO alone. Of course, you can also use these solo builds in a group, especially useful in random groups.

The PvP Solo Templar builds do have both a Cyrodiil and a Battlegrounds setup. You can play with these builds alone, but it is recommend to always join a group to increase your odds of survival.

The Beginner Templar guides and builds are meant for new players. They introduce you to the Templar class and give you a good starting point for your adventure in ESO.

Templars call upon the power of light and the burning sun to deal massive damage to their enemies while restoring health, magicka, and stamina to their allies.

Seeking darkness whether it might be found, the Templar is a beacon to their allies and a blinding threat to their foes. As a Templar, you must bring justice to Tamriel in the form of cleansing light. Call forth the limitless power of the sun to obliterate your enemies and restore yourself and your allies in radiant light.

When playing the Templar class, you’ll always light the way.

The Templar class has three class skill-lines like every other class in ESO. Below you can find a quick introduction to the Aedric Spear, Dawn’s Wrath and Restoring Light skill-lines.

Bring holy vengeance with relentless, powerful weapons formed of hard light that can deal magic damage, stun your enemies, and support your allies.

Unleash the unyielding power of the sun to bathe your enemies in flame and deal massive damage. Empower your attacks and weaken your foes in radiant heat.

The Templar class Restoring Light skill-line is focused on healing and support abilities.

The Templar class in ESO has five specific synergies, Gravity Crush, Supernova, Blessed Shards, Holy Shards and Purify. Some of them are variations that only slightly differentiate. Synergies are additional effects taht some abilities offer. 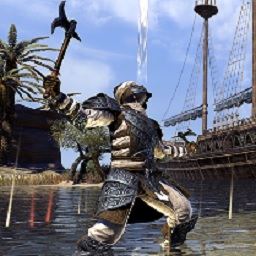 Blessed Shards is a Synergy effect created by a Templar ally using the base skill Spear Shards or the morph Blazing Spear. By pressing the synergize button, you use Blessed Shards to restore some of your Stamina or Magicka (whichever maximum is higher). 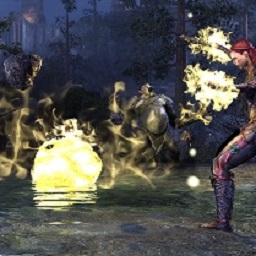 Supernova is a Synergy effect created by a Templar ally using the base skill Nova or the morph Solar Disturbance. By pressing the synergize button, you use Supernova to deal additional damage to nearby enemies, knocking them down and stunning them.

Gravity Crush is a Synergy effect created by a Templar ally using the Solar Prison morph of the Nova base skill. By pressing the synergize button, you use Gravity Crush to deal additional extra damage to nearby enemies, knocking them down and stunning them. 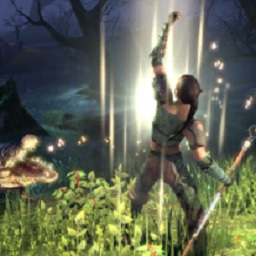 Purify is a Synergy effect created by a Templar ally using Cleaning Ritual or its morphs Extended Ritual and Ritual of Retribution. By pressing the synergize button, you use Purify to immediately heal and remove harmful effects from yourself. Purify only becomes available if you have a harmful effect on you.

Below you can see an example of a Magicka and Stamina Templar in ESO. Of course you can customize your character however you want, there are plenty of good outfit options in ESO. 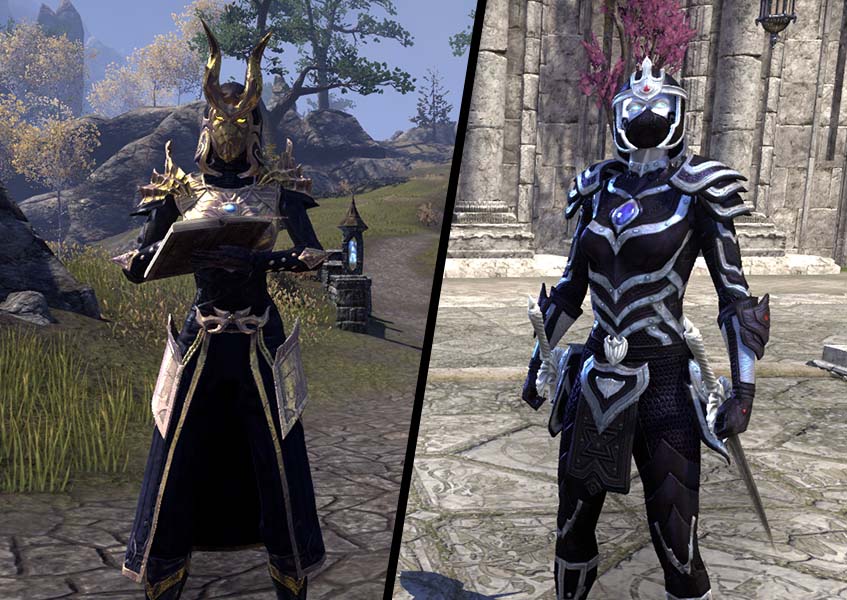 It is not much known about Templar lore, except a few books that can be found ingame, for example via bookshelves, they help level up your skill-lines too.

Aura of the Righteous

Insomuch as all fell things abhor the light, so has Stendarr gifted all those who invoke His Name with the ability to clothe themselves in a righteous aura of blessed light. Over time, even as evil’s many Abominations found new ways to afflict Tamriel’s mortals with destruction and death, the Priests and Resolutes of Stendarr have adapted Stendarr’s glowing gift to many purposes, whether to smite, to defend, or to heal.

For offensive means, Stendarr’s gift most often manifests as a piercing beam of light, resembling a spear of purifying sunlight and oft referred to in those terms.

As a form of armor, Stendarr’s gift may take the form of a diffuse aura that surrounds the righteous, mitigating the attacks of the abominable, or it may focus into an almost-palpable shield to ward off a specific threat.

Worshipers who eschew all forms of violence, such as the Harmonious Masters of Lillandril, have turned Stendarr’s glowing gift into a tool for healing, and then freely spread their knowledge of cleansing and healing rituals, even to Stendarr’s more militant adherents. For even in the hands of a warrior, how can the curing of ills be an ill thing?

Thus Stendarr looked upon the world of mortals, and he found it afflicted by Abominations. And he made it known unto his priests, resolutes, and templars, that these unnatural profanities are abhorrent in his sight, and are to be exterminated by the Righteous without halt or mercy. For these Abominations are each and every the eternal enemies of the mortals of the Mundus, and shall not be suffered to abide among us.

And these Abominations are four in kind, and may be known thusly:

–The DAEDRA, those unworldly horrors that are not of the Mundus, but come from Oblivion to inflict cruelty and death upon the mortals of Tamriel.

–The MANBEASTS, those mortals who through traffic with the bestial Hircine do change their skins for those of animals, preying thence upon the innocent.

–The RISEN CORPSES, those restless undead whose rotting bodies persist with loathsome and unnatural vigor, sowing fear and agony among the living.

–The DEATHLESS VAMPYRES, who feed horrifically upon honest citizens, regarding righteous mortals as mere cattle to sate their unholy hungers.

Know these Four Abominations, O ye righteous, and gather to slay them where’re they appear.

The Friend of All Mortals

Call him Stendarr, call him Stuhn, call him what you will, but the God of Mercy and Justice is the friend to all the mortals of the Mundus, whether they acknowledge him or not. Yea, even the heretic Dark Elves of Morrowind may use his magic of defense and healing, even so the scaled folk of Argonia, for Stendarr in his benevolence draws no distinction between those who rightfully worship him and those who, in their ignorance and error, do not.

Join with me, then, in a prayer to Stendarr for guidance, that we may look with mercy upon our fellow mortals, that we may show the compassion to help them at need, and find the strength to eradicate abominations that threaten us all.

Rituals of the Harmonious Masters

Some Elves disdain to venerate the et’Ada Stendarr on the grounds that he is the Apologist of Men, and thus unworthy of worship by the Children of Aldmeris. But if these narrow folk would open their souls to Stendarr’s mercy, they would understand that Stendarr in his love cherishes and protects ALL mortals, even—perhaps particularly—those who are less fortunate in their heritage.

It is for this reason that we of the Sect of Harmonious Masters have dedicated ourselves to adapting the magic of Stendarr’s Light into spells of healing that can be employed by all the mortal races, not even excepting the beast peoples. The restorative virtues of our rituals and ceremonies are equally efficacious for every race. They can be cast by individuals of every blood, no matter how degraded, so long as they have the will and the wisdom to learn how to use them.

As Stendarr, in his boundless mercy, has given all mortals the potential ability to employ his magical gifts, we of the Harmonious Masters feel honor-bound to provide knowledge of these spells to all the peoples of Nirn freely and without hindrance. We can think of no higher cause than to improve the general welfare of all folk in every culture.

Smiting all that is unholy,

Transfixing it with point and glow,

Elevates us with its aura,

Abominations it strikes down.

Resolute with spear and crown!

What race is best for Templar in ESO?

It is always recommended to check each Templar build individually as choices can vary depending on the situation.

What is the best Templar Build for ESO?

Is the Templar class good in ESO?

The Templar is a powerful and good class and can be played as a healer, damage dealer or tank. The Templar class is the most used Healer class because it has a full class skill-line dedicated to it. The Templar also works great as damage dealer (DPS) or tank. Please visit the Templar Class Build Guides for further information on what build setups work great.

Can a Templar be a Vampire in ESO?

Introduction Welcome to the Magicka Templar healer build created by Fengrush for PvP in ESO (Elder Scrolls Online). Make sure to bookmark the link as [...]

Introduction to being a Damage Dealer in ESO (PvE) Hey all! Thanks for stopping by. This will be my complete beginner guide to being a [...]