This build here is specifically designed for SOLO play. You can play this build in Overland or Dungeons (normal and veteran). I also made sure to give you a few gear choices below because it is not always easy to get the right gear in ESO. Sorcerers have a pretty easy time compared to other classes soloing stuff because you have pretty big shields and good self healing plus a pet that can also tank enemies.

If you want to see more viable gear options I recommend reading the Magicka DPS Gear Sets Article which explains all of the sets in detail.

This setup is easier to acquire and also has more defensive stats compared to the first one, which means it’s safer to play. Once again, make sure to use the Iceheart Monster Set, it really makes a huge difference in terms of defense, it procs very easily and gives you a huge shield that absorbs a lot of damage.

Both Necropotence and Mother’s Sorrow can be farmed in their respective Overland zones or you can also buy them via the Guild Store. It would be preferable if you get the gear with divine trait, but you can also use any other trait, you will not loose that much power. And non divine gear pieces are usually very cheap to buy.

You can get a Mother’s Sorrow Shock staff fairly easy through a quest item (Argonian Muck Minder of Mother’s Sorrow -- Unique Item). The quest is called “The Saving of Silent Mire“.

You can either farm or buy Necropotence and Mother's Sorrow for pretty cheap prices if you do not pick the best in slot trait. More important is that you just get the full sets together as fast as possible, even if you do not have the best traits.

IMPORTANT: You can get a Shock Mother’s Sorrow Staff by doing a simple quest, that way you earn the staff! You will receive the “Argonian Muck Minder of Mother’s Sorrow” from the Quest in Silent Mire, Deshaan.

The main goal of the build is to keep up all the DoTs, your Shield and Healing skill, that way you always have constant damage and you are shielded all the time which means the enemy can not touch your health. And the self healing will bring you back up in case you ever drop low on health.

This Tri Stat buff food can be bought in the store and is very cheap. The reason we are using this on our first setup is because then we can use more stamina to dodge roll and block enemy attacks. 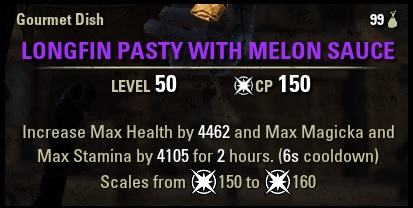 Because we need to get sustain from somewhere else if we do not have False God’s Devotion, I recommend using the Witchmother’s Potent Brew on Gear Setup 2 & 3. You can buy this very cheap in the guild stores or even ask people to give you some. 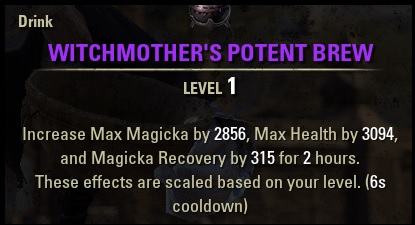 I choose Breton because you get a huge sustain boost and higher resistances in combination with extra max magicka. All magicka based classes work but you might want to make some small adjustments.

Because we already get Major Sorcery (20% extra spell dmg) through Critical Surge, we can simply use the normal Magicka Potions. You will loose Major Prophecy (10% Spell Crit) though, if you want to get that buff too you should use the Spell Critical Potions that gives you that buff and some extra health like you can see in the picture below. 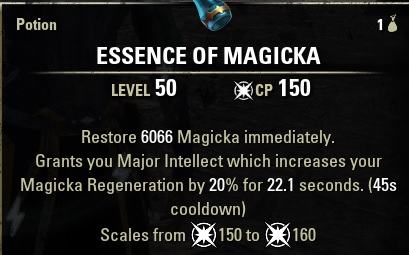 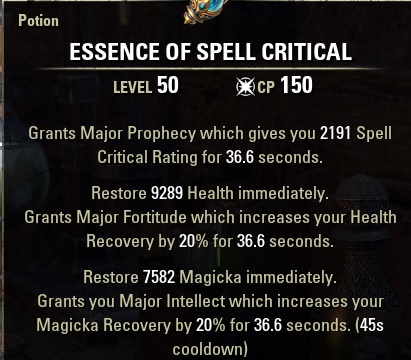 Important: Make sure to get alchemy to level 50 to unlock the Medicinal Use passive. That way you can keep up the buffs of potions a 100% of the time.

Resource management with a solo build is slightly different compared to a group setup because you can not really rely on your healer to give you resources. Now that does not really matter because we have other means of restoring resources. Your main tool of restoring resources is your heavy attacks, they are pretty slow but you will regain so much resources. You can also use your potions on cooldown that will return a lot of extra resources. Elemental Drain is a key ability to increase your sustain and damage in a fight, make sure to keep it up all the times!

For this kind of setup there is not a fixed rotation at all, your main goal should always be to stay alive and you do that by keeping up your shield and healing abilities.

If you want a fixed rotation for this setup then you have to do the following:

19.10.2019 Updated the build for the Dragonhold DLC, Elsweyr Chapter