The Dragonknight builds that you can find here focus on optimizing your setup as much as possible, that way you can really perform as good as possible on your Dragonknight. Sometimes gear can be hard to acquire depending on the build you want to use, that is why I made sure to always include three different setups, the best in slot, advanced and a beginner setup.

Nonetheless, I would always recommend getting the best setup like described in the build, to completely optimize your setup. Please keep in mind that combat changes occur all 3 months in the Elder Scrolls Online, therefore it is possible that certain sets will change for your Dragonknight!

The PvE Solo Dragonknight builds are optimized for solo gameplay. The builds below have a good balance between damage, survivability, healing and movement. Everything you need to get through ESO alone. Of course, you can also use these solo builds in a group, especially useful in random groups.

The PvP Solo Dragonknight builds do have both a Cyrodiil and a Battlegrounds setup. You can play with these builds alone, but it is recommend to always join a group to increase your odds of survival.

The Beginner Dragonknight guides and builds are meant for new players. They introduce you to the Dragonknight class and give you a good starting point for your adventure in ESO.

Burn your foes in cleansing flame and withstand almost any assault with the Dragonknight, a fiery, unrelenting Class that thrives in the heart of battle. The Dragonknight Class in ESO allows you to win the war of attrition with abilities that draw power from both the earth and the beasts of myth while overpowering your foes with ferocious Fire spells.

With the Dragonknight, you bring ruin in the form of molten metal and fire.

The Dragonknight class has three class skill-lines like every other class in ESO. Below you can find a quick introduction to the Ardent Flame, Draconic Power and Earthen Heart skill-lines.

Unleash your fury with relentless Fire and Poison abilities that deal devastating damage over time and intensify your attacks.

Harness the power of the ancient Dragons to strengthen your defenses, surround yourself in protective scales, and leap into battle with unstoppable ferocity.

The Dragonknight class Draconic Power skill-line has a bit of everything, be it damage, healing, defensive and support abilities.

Draw from the power of the earth to empower your and your allies, stun your foes, and encase yourself in damaging molten lava.

The Dragonknight class in ESO has two class specific synergies, the Shacke and Ignite synergy. Synergies are additional effects that some abilities offer. 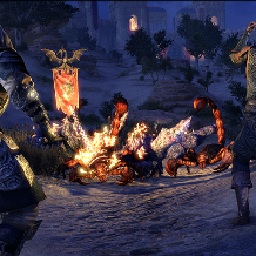 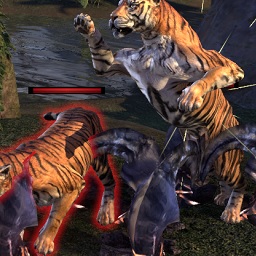 Ignite is a Synergy effect created by a Dragonknight ally using Dark Talons or one of its morphs Burning Talons or Choking Talons. By pressing the synergize button, you activate Ignite to deal flame damage to all enemies held within the the talons.

Below you can see an example of a Magicka and Stamina Dragonknight in ESO. Of course you can customize your character however you want, there are plenty of good outfit options in ESO. 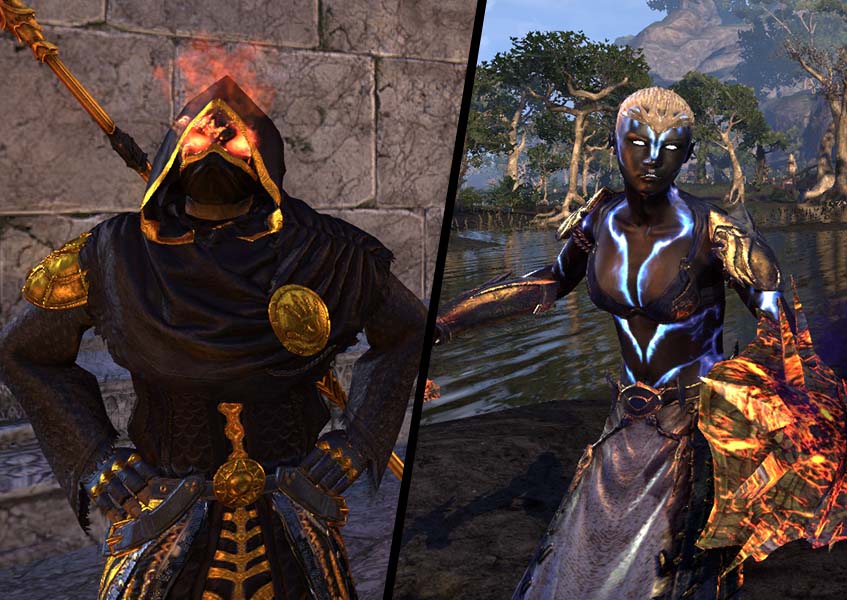 It is not much known about Dragonknight lore, except a few books that can be found ingame, for example via bookshelves, they help level up your skill-lines too.

Last night I was sitting in the Anchor’s Point taproom, nursing a mug of rum posset while poring over Ralliballah’s Eleven Ritual Forms, when suddenly my quiet corner was invaded by a tall, armored figure. I asked if he would stand somewhere else, as he was blocking the light, but he replied something to the effect that a handsome woman shouldn’t be wasting a moons-lit evening on reading, set a frothy tankard on the table, and sat down next to me.

Before I could protest he launched into the story of his life, the subject of which–himself–he seemed very enthusiastic about. He was a product of the north-coast port town of Fharun, where he’d grown up with the conviction he was destined for bigger things. When he was old enough he’d left and made his way to central High Rock, where he’d fallen in with an old half-Akaviri arms-trainer who had taught him the ways of the so-called “Dragonknights.” It was then that he finally found his true calling perfecting the form of magical combat that the Dragonknights refer to as “ardent flame.”

Blowhard or no, once he brought up the arcane arts he piqued my interest. I asked him to tell me more about this discipline of martial magic, as I was unfamiliar with it, and he was only too happy to oblige. With ardent flame, he explained, the Dragonknight could set his enemies afire, draw them to him with a flaming lasso, wreathe himself in a cloak of flame, even breathe fire just like the legendary dragons of yore. And this was, he asserted, because a Dragonknight used actual Dragon magic handed down from those mighty warriors who fought and won a war with the Dragons back before the First Era.

It was this last claim where he lost me. Did he really expect me, a Mages Guild sorcerer of the first rank, to believe that an unlearned lout like him was casting spells using long-lost Dragon magic? I held up a hand, rather peremptorily, and to my surprise (and perhaps his own) he actually stopped talking. I told him I’d heard quite enough about his Dragon magic, thank you very much, and that as far as I was concerned it was no more than a variant of our standard repertoire of flame spells, what the Shad Astula curriculum categorizes as “Destruction Magic.” I desired him to withdraw and allow me to return to my reading.

He sputtered for a moment, but then gave a condescending smile and said there was no need for the “little lady” to be afraid, as a Dragon could be gentle as well as fierce. Perhaps I didn’t understand just how ardent his flame could be.

I warned him to be on his way, but he scoffed and persisted. It was when he offered to show me his “lava whip” that I finally lost all patience. It’s a shame, because the proprietor of the Anchor’s Point told me I would no longer be welcome there, and I liked that place.

I suppose I could have shown more forbearance, but everyone has a limit–and besides, what’s the big deal? Scalp and beard hair always grows back eventually, even when it’s been scorched off.

Forged in the Heart of Mundus

As you are a Child of the Mundus, you shall learn to tap the powers of its very HEART. With your feet upon the earth of the world that gave you birth, you shall feel its support, you may partake of its power, you will SUMMON its essence for weal and for woe.

With the strength of STONE, you will find armor against attacks, and aid to assist allies. You will SCORCH your enemies with the heat of molten rock, and choke them with clouds of ash. You will REINFORCE your cohorts and make them as metal, PETRIFY your opponents and make them as masonry.

The Power of the Mundus is in YOU. Let it flow through you as LAVA flows from a volcano. Let it fuel your WRATH and buttress your bastions. None can stand before you, for you are a Child of the MUNDUS.

As all schoolchildren know, northern Tamriel was invaded by a legion of Akaviri raiders in 1E 2700. Mighty warriors with potent powers, these Akaviri cut a swath through Skyrim, defeating all opponents, until they were met at Pale Pass by a Cyrodilic army under the command of General Reman. After a brief battle, the Akaviri surrendered en masse to Reman, saying that in him, they had found what they had come to Tamriel to seek.

With the Akaviri added to his own army, Reman marched on, pacifying most of Tamriel, becoming Emperor, and founding the Second Empire. The best and wisest of the Akaviri became the Dragonguard, under the Emperor Reman’s personal command.

For the next two centuries the Dragonguard protected the Reman Dynasty, defending the Emperors with abilities said to have been learned from the Dragons themselves, which persisted in Akavir far longer than they did in Tamriel.

But when Reman III was assassinated in 2920, that was the end of the Reman Dynasty (as well as the First Era). Officially the Dragonguard was disbanded, some said in shame at having failed to protect the Emperor. However, when the Potentate Versidue-Shaie assumed the Ruby Throne, the Dragonguard was unofficially reactivated, more as an intelligence network than as an honor guard.

Other former members of the Dragonguard followed different pursuits. Some joined their former centurion, Dinieras-Ves, when he founded the organization that would come to be known as the Fighters Guild. Others became roving adventurers, selling their services as combat trainers or swords-for-hire.

One of these was a former Dragonguard whose name is now lost, and is known only to this chronicler as the Grandmaster. He took it upon himself to ensure that the martial and mystical arts of the old Akaviri would survive into the new and turbulent Second Era. However, he would teach his skills only on condition that those he taught would go on to teach others. This was the origin of those whom we now call “the Dragon Knights.”

In the generations since the fall of the Akaviri Potentates, a new martial tradition has arisen in Tamriel, one which bears all the hallmarks of a coherent magical discipline, though it is said to be descended from the powers of the legendary Dragons and those mortals who fought them. I refer, of course, to the so-called “Dragon Knights.”

Whether or not their abilities originated from Dragons–and you must give me leave to doubt it, for no Dragons have been seen in Tamriel for thousands of years, if they ever existed at all–the powers which a skilled Dragon Knight can deploy are undeniable. There are several right here in the Imperial City, members of the Tower Guard, and they have demonstrated some of their effects at my request.

One of these Dragon Knights, a sergeant in the Guard, showed me how he could wreathe himself in flame without being burned (though I could feel the heat from several paces away). He then cast a loop of flaming chain around a target dummy and drew it to him, where it was quickly immolated. Finally, one of his subordinates burned another target dummy by literally breathing fire upon it!

I was impressed. It was almost enough to make one believe in Dragons.

To Smite with Dragon Claws

If you attack us, you will meet talons.

If you strike us, you will eat spikes.

If you injure us, our wounds will close.

If you anger us, you will burn.

If you run from us, we will pounce upon you.

You cannot win. We cannot lose.

What race is best for a Dragonknight in ESO?

Is the Dragonknight good for DPS?

Is the Dragonknight a good class in ESO?

The Dragonknight is a good class and can be played with any setup. The Dragonknight performs great as a Damage Dealer, Healer and Tank. Dragonknights perform best as melee setups because many abilities have a rather small range. Please visit the Dragonknight Build Overview Page for further guidance on good Dragonknight build setups.

Introduction to being a Damage Dealer in ESO (PvE) Hey all! Thanks for stopping by. This will be my complete beginner guide to being a [...]